April 25, 2019
Commuters rely on stable, smooth surfaces for safe driving. Any form of compromise to the structure would open them up to a whole host of issues that could damage their tires, wheels, or even cause an accident. One of the biggest problems Nashville roads are facing today is potholes. We are in the middle of “pothole season” which means there is more potential for issues down the line. Commercial and residential property owners might notice the same thing. Once spring hits, their parking lot or driveways seem to be riddled with flaws. We take a closer look at what they are, how they form, and how they can be repaired.

HOW POTHOLES ARE MADE

Potholes are created when moisture penetrates the surface of the asphalt and seeps into the pavement. As temperatures drop and the water freezes the material expands. Once it’s thawed, the material is weakened. Now add on the weight of cars, trucks, and semis plus friction and the structure is further compromised. You can review the below images for a full illustration. 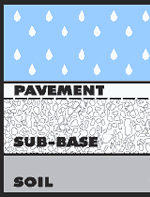 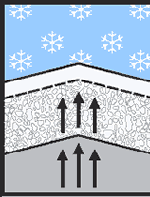 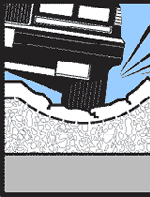 Potholes are created from the freezing and thawing of water. That being said there is a “pothole” season, which is spring. Tennessee’s temperatures in the spring are beautifully mild, but that warms the asphalt melting any internal ice. Air pockets have now formed where the ice once stood allowing the material to crack. During the winter, as long as the temperatures are cold enough the water will stay frozen and help maintain structural integrity.

By Feb 25, 2018, Metro Nashville had filled just over five thousand potholes. As of Feb 25, 2019, that number grew by ten percent. While it may not seem like a large percentage, consider the fact that it was only the beginning of pothole “season.” In a recent article for The Tennessean, Metro Public Works spokeswoman Cortnye Stone said, “we have crews out working all day, every day, five days a week, sometimes Saturday, just to keep up,” she said. “Sometimes it feels like we’re just catching our breath to get them all filled.”

All of these damages cost somewhere around $94,000. The biggest question people are asking is when will the season end?

DAMAGES POTHOLES CAUSE TO YOUR VEHICLE

Your tires are designed to protect you while driving. The tread grips the road and the inflation gives your vehicle buoyancy to propel motion. Edges of a pothole can put pressure on one side or the other of your tire causing it to pop. They can also separate the tread giving you more chances to skid.

The un-repaired surfaces of asphalt can do a lot of damage to your wheels. If your tire gives way to the crisp edge of a pothole, the wheel is next in line to feel the effects. The sheer weight of the vehicle traveling at high speed succumbing to a crevasse will bend the wheel out of place.

Next in the lineup is your suspension and alignment. The suspension helps absorb impact, but it has limits. The sharp impact from hitting a pothole could send it out of line. You’re now looking at a weakened alignment and possibly some trouble steering.

WANT TO LEARN MORE ABOUT THE POTENTIAL SAFETY HAZARDS YOU SHOULD LOOK OUT FOR ON THE ROADS?

HOW CRACKS AND POTHOLES CAN DAMAGE YOUR VEHICLE

GROWING REPORTS OF POTHOLES IN NASHVILLE

Most of Middle Tennessee can claim they didn’t see major ice or snowfall this year. So, why are there a growing number of potholes? February was one of the rainiest months on record. It had 13.5 inches according to the National Weather Service. Even though there wasn’t ice on the surface, water can seep into the structure and freeze. The issue around road damages has required some team members to work ten hour days to get them filled. It could be between 45 to 65 being repaired each day. Nashville and Middle Tennessee residents might attest to the road conditions being some of the worst they’ve seen in a while. Considering the statistics previously mentioned it would be hard not to assume our roads are getting worse. Stone from Metro Public Works thinks otherwise. In the same article, she states that more people are aware of the issues and taking the time to report the problem.

HOW TO REPORT A POTHOLE ON THE INTERSTATE OR HIGHWAY

You have several options for contacting locals about reporting a pothole if they are on the interstate or highway. If you see anything that could be potentially dangerous, you can call the numbers listed below.

Some roads are more prone to damage than others. High traffic areas are susceptible to all sorts of issues due to the constant weight and friction from vehicles. Fortunately, asphalt paving companies in Nashville help to repair damage to roads and their surfaces. The pothole is repaired by cleaning out the debris and then adding in an adhesive. Slowly, the new asphalt is added in layers. A pavement roller will compact the pavement and level it off. For more information about having your roads repaired and contact Roadbuilders.